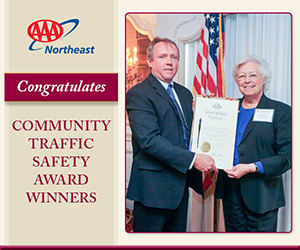 The Club recognizes AAA Northeast communities that identify local traffic safety problems and then work to solve them as part of the AAA Community Traffic Safety Awards Program. The awards were presented at an annual luncheon awards ceremony held on October 25, 2018 at The Garden City Hotel in Garden City, NY.

“We are pleased to honor our award-winning communities that are doing such vital work to ensure that drivers, pedestrians and cyclists can all reach their destinations safely,” Corlett said.

AAA also presented this year’s Outstanding Achievement Award in Traffic Safety for an Individual to New York State Senator Joseph Robach and New York State Assembly Member Sandra Galef. Senator Robach, unable to attend the event, received recognition as the cosponsor of the new child safety seat law and for his exceptional record of community service and involvement, and his outstanding record in the Legislature.

Assembly Member Galef was recognized at the event as cosponsor of legislation that will require children to remain in rear facing vehicle safety seats until age four, beginning in November 2019. AAA views this new law as vital to saving countless young lives. Galef was further recognized as a person committed to public service for almost her entire life, both as a volunteer and an elected official. She is a leading advocate for legislative reform in Albany, as well as being deeply involved in matters pertaining to government efficiency, consumer issues, health, the disabled community and senior citizens.

Assembly Member Galef was elected to the NYS Assembly in 1992 representing the Towns of Cortlandt, Ossining, Kent, Phillipstown and the City of Peekskill. She hosts two television shows, “Dear Sandy” and “Speak Out with Sandy Galef” highlighting local, regional and statewide personalities and issues. The keynote speaker for the ceremony was Michael N. Geraci, Regional Administrator, U.S. Department of Transportation, National Highway Traffic Safety Administration. His current background and work on impaired driving programs at NHTSA, considering the possible passage of legislation to legalize recreational marijuana was of great interest.

The keynote speaker for the ceremony was Michael N. Geraci, Regional Administrator, U.S. Department of Transportation, National Highway Traffic Safety Administration. His current background and work on impaired driving programs at NHTSA, considering the possible passage of legislation to legalize recreational marijuana was of great interest.

There were six Platinum award winners in AAA’s annual Community Traffic Safety Awards Program, which recognizes outstanding communities for their efforts to make the region’s roadways safer for motorists, bicyclists and pedestrians. The Village of Garden City in Nassau County, the Town of Southold in Suffolk County, the Town of Greenburgh, Village of Irvington, and the City of White Plains in Westchester County and New York City won AAA’s top Platinum Award for the outstanding success and effectiveness of their traffic safety programs, some of which are highlighted below.

Garden City has engaged in diligent, forceful efforts to reduce driving while intoxicated which have had profound results.  In 2001, 336 drivers were arrested for drunk driving.  By 2017, that number had been reduced to 38. The Village also continues to update signage and road markings, as well as having a very active child car seat installation and inspection program.

The Town received the prestigious award for many facets of traffic safety. Strong efforts were made to raise awareness and education about motorcycle safety with the “Looking Twice to Save Lives” campaign. The Town held a large motorcycle safety awareness event and plastered the town with motorcycle safety signs. This resulted in a 20% reduction in motorcycle-related crashes in its first year. The Town was also recognized for engineering initiatives on Route 9A making for safer transport to schools.

Irvington has long been a leader in promoting safer, calmer traffic. A highlight has been the “Stop, Look & Wave” campaign that included posting and distributing highly visible posters and cards with the campaign’s catch phrase, as well as a video explaining how to safely traverse the Main Street intersections safely. The Village also received a special Commendation for having 52 consecutive years with zero pedestrian fatalities.

New York City is being applauded for its vast Vision Zero efforts to reduce serious injuries and fatalities with a focus on pedestrian safety.  Collaborative efforts from the Department of Transportation and the NYPD, the Vision Zero messages continuously seek to change driver and pedestrian behavior. Vision Zero teams have also significantly increased the delivery of their educational programs.  By making traffic safety a political issue, New York City has guaranteed that Vision Zero continues to be in the media and be on the minds of those that use our roadways.

The Town of Southold has long been a leader in coordinating efforts to combat driving and boating while intoxicated on the East End of Long Island. The Town has established a Stop DWI/BWI Task Force that has been effective in curtailing DWI through DWI checkpoints and saturating patrols in areas with a high density of licensed establishments. These measures have resulted in numerous arrests, and the number of DWI-related crashes has been reduced. The Town also conducts numerous safety programs including car seat checks, bicycle safety programs, and other school programs to promote safe driving.

The City of White Plains is widely known for implementing cutting edge engineering efforts to aid in the safe flow of traffic. Recent crash injuries have been near record lows even though the traffic volume in White Plains remains at high levels.  Among their most successful programs in 2017 were the “LOOK” markings and “Advance Walk” programs.